It could have been awful – muddy and crowded – but although crowded it was sunny and  a delight and we quite decided that writers are a rather nice lot.   The festival ran like a well oiled machine and after the first couple of talks even we knew that after the talk there would be a signing in the shop and we would have to make a dash to get a good place in the queue.

Barroux and his children’s book ‘Line of Fire,’ a first world war diary newly translated from French by Sarah Ardizzone and his wonderfully idiosyncratic way of signing with his paint brush. 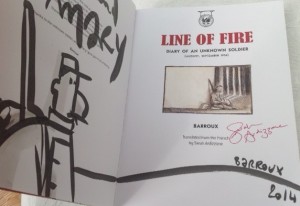 Lee Child’s description of how he named his character, Jack Reacher. Because he is so tall old ladies would ask him to reach for stuff from high shelves and the job of ‘supermarket reacher’ suggested itself and the name for his character. Plus a delightful smile when he recognised Sunny Boy, an erstwhile employee of the same company.

The four hundred year old B&B we stayed in with its wonderful blown garden.

The intimacy of the iconic sixties theatre, set high on the coast overlooking the Lleyn Peninsular, its round concrete structure at odds with rough hewn granite of the rest, meant the audience was close enough to see Catrin’s fingers fall like silk over her harp strings and hear the lead violin breathe deeply as the music moved him.

The first two pieces, Ravel’s Allegro for harp, flute, clarinet and string quartet and Claude Debussy’s Dances Sacred and Profane also for harp, are linked in a way unique to musical history having been commissioned by rival French harp makers to showcase two different harps: Debussy for the now defunct ‘chromatic’ harp and Ravel for the traditional harp.

The traditional harp won but as tonight proved both compositions stood the test of time, both were exquisite and the young musicians and Catrin Finch, inspired.

Copeland’s Appalachian Spring, the finale, performed in its original orchestration for thirteen players, conducted by guest conductor Ben Gernon was simply beautiful and stunned the audience to breath held stillness.

Driving home along the stretch of coast known locally as Good God Corner named after an expletive uttered in awe of its beauty by visiting American airmen in WW2 the sun set was also magical.