Hope must be part of our human make up; an urge

When in dire straits the hope is that a better life or better times can be found but opportunities are few and the way hard and narrow.

If, however, you are fine thank you, the hope is that those in dire straits will go away or be beaten into submission and there are many ways to achieve this.

Litigation, infringement of  civil rights, dehumanising till you actually believe the less fortunate have no right to ask for help/equality/better pay/a decent place to live/clean water/freedom/safety/etc.

The Golden Dream  directed by  Diego Quemada-Díez is a beautiful and deeply troubling film that satisfies on many levels.  A good story well told and acted, an odyssey, a coming of age  in a hostile world, it’s one of those films that lingers in the mind till you have to watch it again.

Four Guatemalan teenagers journey towards America, joining ‘the beast,’ the train loaded with illegal immigrants  hoping to reach the US border and the golden dream like so many migrating birds.  In Spanish the title is the golden cage which perhaps captures more of the engulfing compulsion to migrate.

A motif runs through the film, a beautiful black and white shot of silver flakes falling from the sky. It could be the Milky Way falling to earth, or charred paper, a symbol of hopes gone up in smoke. Eventually we learn what it is – no spoilers – and the film is all the more poignant.

We know the outcome for political or economic migrants: overindulged faces turn away from their plight, hearts turn to stone. Not even the law is on their side, and certainly not the establishment. 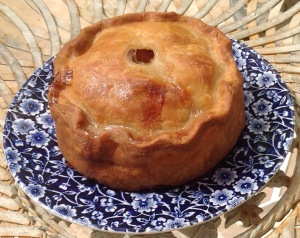 Not lies, not even hats, but the pie itself.  Although a  blue and white number in straw at a jaunty angle over butter yellow curls,  did evoke this memory.

The woman in the hat smiled generously when she saw me staring. I expect she thought I admired her fashion statement so at odds with grey granite and glancing grey rain, but I was again a podgy teenager  carving up a pie.  I was lost in one of those bittersweet moments from the past that stabs the senses from time to time, delicately abandoning clear jelly and fat globules on the side of my plate.

A while back, when I was home alone with my mother, rather than our current status the other way around, after both my sisters had fledged to university and we were left with no one to talk to, my mother had a penchant for pork pies. Perhaps it was a grieving process but there was no other meal in the house for almost two years. Surely not, my memory chides, but then insists. The weekly shopping done, the pies lined up in the fridge in their blue papery wrappers, a little disc of paper holding tight pleats together to prevent air entering.

I have tried to make a pie, twice.   Nigel Slater’s recipe appeared in a weekend magazine and did what it was supposed to do, I guess, inspired me to try.

Firstly hot water pastry is amazingly easy, but more salt would be my advice. If the thought of lard, actual white, creamy pig fat fills you with disgust, I suppose a vegetarian option would work just as well. There is after all vegetarian suet.  As for the filling, lots of pork in a mincer, or chopped small by hand to give it more bite and the pastry shell filled up with jelly and labour intensive stock.  I did all that and the result was disappointing although it  was given a hearty send off by very loyal family members.

The amount of fat in a home-made pie is alarming. Fat, we are assured is what gives food taste. So the amount in a mass produced pork pie, even a melton mowbray shop favourite, is probably mind boggling. No wonder my arteries are furred.
It has taken well over thirty years even to begin to acknowledge pork pies again, but the sight of that hat has set up a longing. Pork pies in the local butcher’s look fresh and meaty and very tempting.
Shame I’ve recently gone veggie.

For the method try

Elizabeth is Missing  is a great story beautifully written. Maudie gets herself in and out of scrapes quite regularly with moments of lucidity, and as a person, as a voice is very effective. One gets a real sense of her, inspite of her confusion, with her assertions over the tins of peaches, her campaign to be listened to over her friend’s disappearance and her forays back to her childhood.

Emma Healy seems to capture the essence of a mind fragmented by dementia. Perhaps it is thus. At present, thankfully, I can only imagine.

The jaw clenching daughter, Helen, coping with her aged P, frustrated and patient by turns, is however very believable and recognisable.

Well worth a read.

Lately I’ve been singing. I’d always rather be dancing but failing that, singing will do: songs from Georgia. (not the Deep South but the country near the Black Sea in the Caucasus.) Food comes in to it, of course, preparing for a
feast where singing is interspersed with raising glasses for a toast and eating, or the other way about.
Recipes researched are rich in walnuts, cherries, figs, apricots abundant there.  The names seductive even before the taste of stewed apricots stuffed with walnut paste or white cherries with hazelnuts registers on the tastebuds, redolent of clear turquoise seas and holidays long ago, Persian miniatures painted on slips of Ivory or gardens dripping in fruit and tinkling with fresh water.

Not sure of course of the authenticity or if my attempts even approach. Never was a fussy cook, earning the irreverent sobriquet Mrs Bunger from the children as if any old way would do. It’s not that, but I’m definitely no perfectionist.

Tick all that apply:

I love my job.

It sucks but someone has to do it.

What am I even doing here?

You’ve got me so wrong.

Murielle's Angel
Create a free website or blog at WordPress.com.