We are wilfully blind to the problems faced by rest of the world. Even the euphemism the ‘third world’ satisfactorily distances us.
We squabble over ‘getting our country back’ while millions face starvation due to war and drought and further millions drown in an attempt to reach this other world, only to find the drawbridge being hastily drawn up and the portcullis down.
The global picture is so much bigger and more important.
Our children will remember us with shame for our wilful blindness and pettiness.

There are many precedents in history and the phrase ‘nothing new under the sun’ springs to mind as well as a poem by Louis MacNiece at the outbreak of WW2. (Substitute the name of politician/tyrant of choice to update)

Conferences, adjournments ultimatums,
Flights in the air, castles in the air.
The autopsy of treaties, dynamite under the bridges,
The end of laissez faire.
After the warm days the rain comes pimpling
The paving stones with white
And with the rain the national conscience, creeping,
Seeping through the night.
And in the sodden park on Sunday protest
Meetings assemble not, as so often now
Merely to advertise some patent panacea
But simply to avoid
The need to hold the ditch; a bare avowal
That may simply imply
Death at the doors in a week but perhaps in the long run
Exposure of the lie.
Think of a number, double it, treble it, square it,
And sponge it out
And repeat ad lib and make the slate with crosses;
There is no time to doubt
If the puzzle really has an answer. Hitler yells on
the wireless,
The night is damp and still
And I hear dull blows on wood outside my window;
They are cutting down the trees on Primrose Hill.
The wood is white like the roast flesh of chicken,
Each tree falling like a closing fan;
No more looking at the view from seats beneath
the branches,
Everything going to plan;
They want the crest of this hill for anti-aircraft,
The guns will take the view
And searchlights probe the heavens for bacilli
With narrow wands of blue.

I see myself  in my final hours, about to face my last judgement, clutching favoured treasures in the palm of my hand.

A perfume bottle – a caprice with daffodil-yellow puffer, not much taller than my thumb, pretty with a sensual shape and feel, or a red bracelet made with nibs of bright coral with a tiny silver pendant of a scallop shell – emblem of the Camino de Santiago which will always sit high in my heart.

This no doubt betrays a shallowness. A crucifix, a rosary, or photos of my nearest and dearest would perhaps be more appropriate, but it is objects I will chose for the memories the engender. 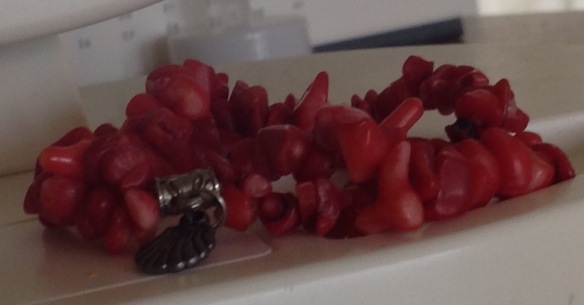