I coveted a chair, an iconic Eames chair, with leather cushion and steamed wood made to look like rosewood and wings. A chair that would ‘fit like an old baseball glove.’ I liked the sound of that but could not fully imagine it, never having worn one. A retired person’s chair that epitomised comfort, grace and ease, the kind that would include lots of reading.
I deliberated, waited, hankered and finally succumbed, choosing a purveyor of fine furniture with a solid and dependable name. On line reviews of their reliability were staunch, besides they advertised in the Observer.
I parted with the money from my dwindling resource, a major purchase for one now un waged and sadly without a pension either (see WASPI for that sorry story). Disappointed but only mildly concerned to discover a wait of twelve weeks for delivery. Oh I counted down the weeks, like an expectant grandmother awaiting a first grandchild. I lasted ten weeks before I checked up on them.

Serves me right I suppose for entertaining ideas way above and beyond. Shortly after my purchase, well after the company would have known my precious £££s would serve only to fleece me and line their pockets, THEY WENT BUST. Never mind baseball gloves and Mom’s good old apple pie. It seems there is nothing to be done since they are in receivership and I parted willingly with my money.

But wait! Just as I prepare to compose a stinging sentence to do with the little man and the unfair system, my bank has refunded me in full. The idea of chair as investment had begun to pall anyway.

Near the entrance to the anthropology museum in Mexico City an elderly woman sat on the pavement, her head bent diligently over her embroidery. Garments folded neatly on a mat beside her, immediately eye-catching, shouted their bright colours. I haggle over the last remaining smock with another customer. The memory of the holiday is too vibrant to permit leaving it behind even though I suspect the lovely garment will languish back home where the light is too grey for the tropical flowers to make sense. The other customer graciously concedes.

Then I ask for a photo, certain this is as much a mistake as the haggling; a typical patronising outsider; a tourist and the old woman, struggling to her feet, agrees without reluctance but without a smile. I explain the smock is a present for my elderly mother who would love to see who had made it and finally she grins. The customer who had so kindly gone without her smock also agrees to a photo 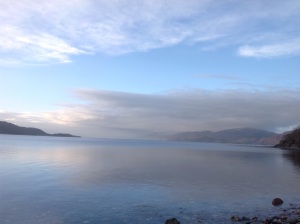 This is the view from my window this New Year  in beautiful Onich near Fort William and I am mindful that the beauty of peace is not afforded to all.

A reminder from Wilfred Owen about the politics of war
TO BE READ TO YOURSELF OR TO YOUR FRIENDS AND FAMILY, WHEN YOU CAN’T GET TO THE RADIO OR TV IN TIME TO TURN OFF CAMERON OR FALLON BABBLING AWAY
If you could hear, at every jolt, the blood
Come gargling from the froth-corrupted lungs,
Obscene as cancer, bitter as the cud
Of vile, incurable sores on innocent tongues,
My friend, you would not tell with such high zest
To children ardent for some desperate glory,
The old Lie; Dulce et Decorum est
Pro patria mori.
[The Latin phrase was used at times of war in the 19th and early 20th centuries. It means roughly “It is sweet and glorious to die for one’s country.”] 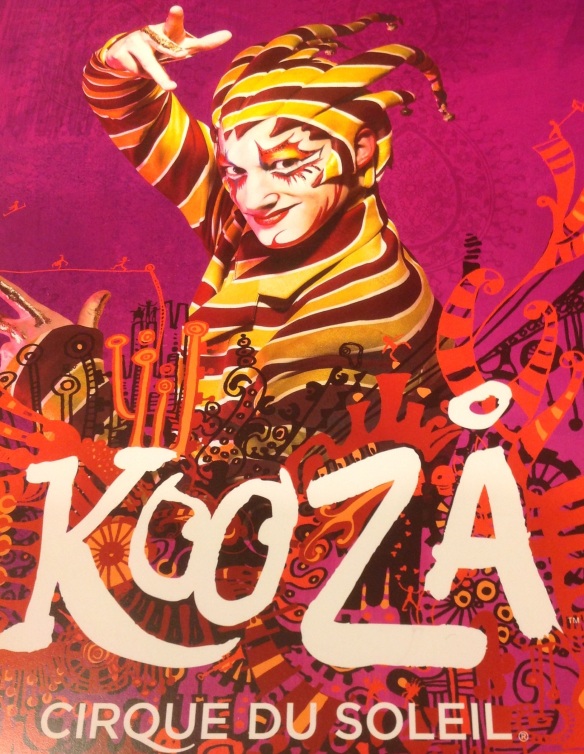 If you have the chance, go to this circus.

Performed with passion, pride, soul even, enough to move the audience to gasp with fear at the daring and with wonder at the skill and dedication.  This is circus par excellence, not an animal in sight.
A charming story, a sort of global fairly tale,  weaves through a white knuckle ballet with audience participation.  The high wire, the balancing , the graceful, the daredevil, the clowning, human endeavour and ingenuity, the set, lighting, costumes and innovation are all breathtaking. 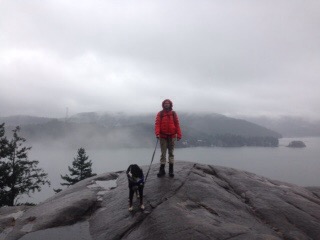 I like the way man and dog merge with the mist.

After a dripping ascent through dense forest and frothing boulder strewn streams we emerged maybe an hour later for a view of the inlet. 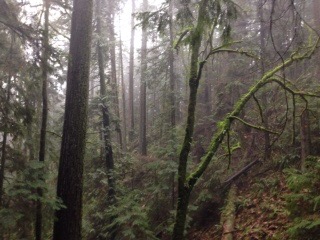 How much is it? We asked the bus driver. His first answer, A dollar seventy five, left us none the wiser.
You need a couple of sailing boats, a couple of beavers, maybe a bear and a couple of mooses should do it.

Wonderful Canadian coins. Lovely sense of humour. A random act of kindness for two old duffers (seniors) on the bus.

This isn’t one of those articles that goes on to publicise a new biography and isn’t even a claim to fame. It is just a coincidence, or if you were to believe such things, serendipitous.

We had wandered to the central library in New York to admire the lofty ceiling of the foyer and found a small crowd standing listening to none other than CT.

His books were new to me, and Brooklyn, the first but magnificent introduction.
I was given Brooklyn by a very erudite nun, Elizabeth Strub. A wise woman who spoke to us in honeyed American tones. I know I was impressed at the time, but now of course would have to look again what her topics was. To do with love, for sure and a person’s duty viz a viz their fellows to do everything in their power to mitigate injustice, hunger, cruelty. Fired by her at the time but slithered back to old ways now, with other people and their problems a mere worrying crease in the brow.
I will be forever grateful for having my eyes opened to CT’s luminous, delicate prose.

CT spoke of the Testament of Mary with a rather angry contingent. His stage adaptation of the novella was being performed in N Y. And a woman took great exception to the imagery. He answered with such grace till eventually rescued by his interviewer and the talk moved on.

Murielle's Angel
Create a free website or blog at WordPress.com.